We’ve been thinking of what to build, and along the way the one thing we keep coming back to is that a huge part of building green is building with reclaimed or reused materials and using things that are not built to consume lots of energy.  So we’ve bought a 1966 Airstream Overland trailer to be one of the first structures on the land.

There are a lot of advantages to the Overlander, including:

We lucked into the Airstream–who has been named Ariel. She’s an Ebay deal, and in excellent condition, with almost entirely original fittings. We do have to replace two windows (someone added Plexiglas at some point instead of the Corning curved glass windows). The wood needs some care and we’ve replaced the floor covering with new, old-looking linoleum (in a very sixties powder blue). Someone also added the leopard-print upholstery, and that’s going to need to change at some point.  New curtains are also needed. 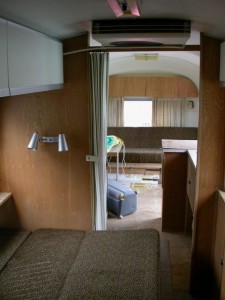 The main debate was restore or redo, and the choice was to go something in between. Keep what we could, and what has that cool retro touch, but redo the areas that need to be brought forward. Overall, she’s going to be a great addition.

This entry was posted in planning phase and tagged airstream, building. Bookmark the permalink.