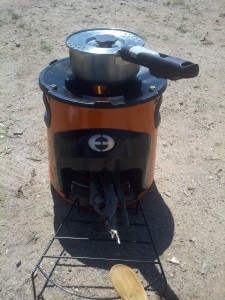 Our dependence on fossil fuels is so pervasive that it’s nearly impossible to find a place in our lives without it.

We’re hoping to get all ranch vehicles running on waste-oil bio-diesel soon, and eventually grow our own diesel fuel with algae or other plants. We also want to get away from using petroleum propane gas, on which we spend about $15 a month to provide cooking fuel. I know $15 seems like a small amount, but it will be a big amount when propane prices skyrocket when the era of cheap petroleum ends.

The good news is the CLR ranch is wooded, and there is a lot of fallen wood everywhere — tons of it. So we have been exploring Rocket Stoves as an alternative to propane for some of our cooking.

A rocket stove is an efficient cooking stove using small diameter wood fuel which is burned in a simple high-temperature combustion chamber containing an insulated vertical chimney which ensures complete combustion prior to the flames reaching the cooking surface. The principles were described by Dr. Larry Winiarski from Aprovecho in 1982 and stoves based on this design won Ashden Awards in both 2005 and 2006. Interest in rocket stoves has led to the development of rocket mass heaters and other innovations.

Well we ordered one, and it’s amazing. In the picture above you can see that I cooked lunch the other day. It cooked an entire meal with two sticks, each about 4″ and as thick as my finger.

The Rocket Stove is so efficient, that it’s smokeless. Apparently it burns so hot even the smoke burns! I’m sure they don’t recommend it, but I think it could be used indoors.

This entry was posted in The Vision and tagged cooking, peak petroleum, propane, rocket stove. Bookmark the permalink.