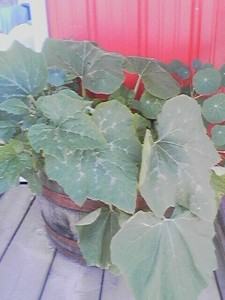 We started the compost pile last year with red wiggler (worms) to help it along. It took a couple of tries—the worms dried out or got cold in conventional compost bins. Eventually, we found that a compost bin made of stacked straw bales made for a perfect area for the worms. It’s warm in the winter (straw insulates), and the straw also keeps the worms comfortable in the summer. We moved the compost to where it has morning sun and afternoon shade. This year we pulled out some compost to see how it would do.

Since we’re not ready to plan a full garden, we got a couple of old whiskey barrels that had been cut in half. They’ve proven ideal planters. The compost went in along with some seeds in early June—we were a little late with the planting but we wanted to be well past the last frost. Everything has come up gangbusters—including a zucchini that we didn’t plant (a seed had made its way into the compost and wasn’t eaten by the worms). 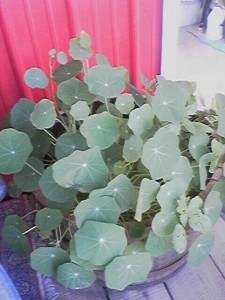 The lavender didn’t take. And next year I’ll go for some marigolds or onions to help the tomatillos—they’ve had their leaves chewed on a bit. The other things we’ll try for next year are larger beds, some corn in the ground (by all accounts, sweet corn does well here), and an earlier planting.

Now some folks will say that high altitude gardening is difficult—we have a neighbor who proves otherwise. His garden is beyond lavish with so much lettuce, zucchini, cucumber and other vegitables that he’s asking folks to come over and help harvest.

There are a couple of things that have helped. One is to use a planter or raised bed and augment the soil with good organic compost. The other is to plant in an area or use netting to keep the birds and rabbits out (and sometimes the elk and deer, too). It does seem that the elk and deer don’t like squash plants—if you plant them around the other plants they tend to leave everything alone.

The last issue we have with gardening at 6,800 feet is one of a short summer–it’s going to be interesting to see how long the growing season does last. We expect our first frost to come in October. A number of folks use green houses around here, and we want to experiment with that. But we also want to look at water walls, and there is nothing quite so effective as straw mulch to bed down the plants for winter (you layer the straw over the top and root crops such as carrots and potatoes do very well–we have a neighbor who has even grown kale in the winter this way).

For more about high altitude gardening, visit High Altitude Gardening blog, Seeds Trust, or get a copy of Growing Food in the Southwest (a permaculture approach).

This entry was posted in Life in New Mexico and tagged compost, Food, gardening, high altitude, seeds. Bookmark the permalink.