The bathroom has taken longer than we thought it would, in part because it’s been such a beautiful summer that we keep getting lured outside to do work (or play–it’s been perfect riding weather, and the wildflowers are hip high). But we finally have the tub in place. 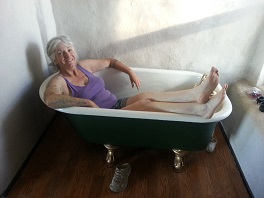 The tub itself dates back to 1905–we found it on Craig’s List, of all places. New cast iron tubs can run as much as $3,000 or more. So we went looking for a deal. This tub has a history–it was brought to California originally by a woman who helped found Laguna’s Pagent of the Masters. She lived to be 105, so we’re taking that to be a good sign.

The tub was in terrible shape to start–the sides painted and repainted, and chipping, some awful 1950’s fixtures that were half missing, and some rust from a chip in the porcelain. We painted the sides a dark green for contrast, with a paint made specifically for iron. The claw feet just needed a little “brass” paint on them, and a little porcelain repair painted on took care of the rust and the chip. And then we went for new fixtures (we weren’t able to find used fixtures that we wanted, so we went for a good price on US made brass fixtures).

Now we’re ready to put in the drains and connect the hot water. And then we’ll finish up with the sink (which came from Habitat for Humanity Re-Store), but more on that later.

This entry was posted in building phase and tagged bathroom, clawfoot tub, tub. Bookmark the permalink.