Fresh water is one of our most valuable resources. At CLR we have a great well–but we’re aware that water should not be wasted. We’re lucky here. It’s estimated that about 1/6th of the world’s population does not have fresh water–and only 2.5% of the water on earth is drinkable. Add in that the world’s population is expected to double over the next fifty years, and the math is obvious for the value of safe drinking water. 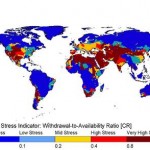 You can see a larger version of this map that the stress being put on water systems worldwide at World Water Council.

The areas in brown and orange are in high stress, and some of these areas are in our own backyards. So…this means rain catchment systems here at CLR. And we’ve installed our new shower.

Now a new shower may seem a bad idea — what you’ve got a system to use more water. But we all want (and after a day playing with cob and adobe we need) to be clean. So our new shower uses a couple of things to keep it sustainable.

First is our Summer Shower bag. We use the solar oven if we either want fast heating (as in hot in an hour on a sunny day), or a really hot shower. We’ve had it get so hot, in face, we had to wait a few hours for the water to cool. So…on hot days we just heat the water in the bag direct in the sun (making sure to put it on flat surfaces without exposed nails–the bags can puncture).

The big advantage of the Summer Shower is that it lets you see the water you’re using. We have two 5 gallon bags and that’s enough for four folks to shower (yes, even if you have long hair). There are smaller versions, too–a 2.5 and a 3–which heat up faster, and there’s a 10 gallon version, too, with two sprays. But the 5 gallon seems to do the job just right. (It’s also not expensive.)

The second thing we’ve done is to set up the shower with a very cool stone floor, which feeds into our dry well. Under the stone we have a pond liner. The floor is also slightly slanted to feed into the pipe that goes into the dry well.

The advantage here is that by taking the gray water through a filtration system, it can feed back into the aquifer, so we’re putting back water that’s been taken out. Now it’ll take hundreds of years to actually get down hundreds of feed to where the aquifer is located, but it’s keeping the system in balance. It’s also pretty, and the stone feels great under your feet (particularly when the flagstone is warmed by hot water).

We’ve also put in a bench outside the shower, made from scrap lumber and logs–reuse of everything is something we strive for on all projects, so very little gets thrown away. And we’ve set up a flagstone path to the shower (flagstone courtesy of a neighbor who had extra, so we got the stone and he cleaned up his front yard). We’ll do more of these benches to go around the ranch since they’re so easy to make (less than an hour of work) and cost nothing more than the price of a few deck screws.

For final touches on the shower, we’ve put in a shower curtain that is really one of the clear tarps we used this winter to keep snow and rain off the straw bales before plaster starts going on this spring (we need nights to be above freezing before we plaster). And we’ll add a couple of shelves and hooks (more spare lumber put to good use).

The shower itself is also recycled metal from a friend’s yard. We had him make up both the privy and shower (with a roof between that now shades the bench) for $400. The roof is also where we installed the solar panels, and we put skylights in the shower and the privy, so the light inside is wonderful. And with the shower curtain down and the door pulled closed, the hot water heats up the shower so that you can shower in just about any weather (except perhaps a lot of snow). So now we have a beautiful outdoor shower that’s also practicing wise water use–and it didn’t cost much. A win all the way around.

You can see a map of the