June 6th, 2011 — For those of you who follow the news, you might have heard about some massive fires in South Arizona. As of my typing this, over 350 square miles of beautiful forests have burned. Thousands of fire-fighters are fighting this fire which is 0% contained.

In the picture above you can see the smoke moving toward the Cielito Lindo Ranch. At that moment we had beautiful blue skies — for the moment, anyway. 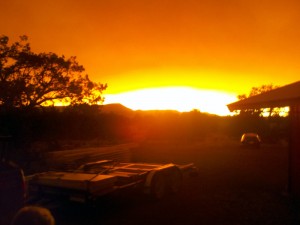 In this picture you can see our sunset last night. We were still unloading windows and doors from the Habitat for Humanity “Restore”.

By this point the sky was a dark orange, the air was foul, and ash fell from the sky like a light snow.

As I write this the charming town of Luna New Mexico is being evacuated. The fire has jumped into New Mexico. 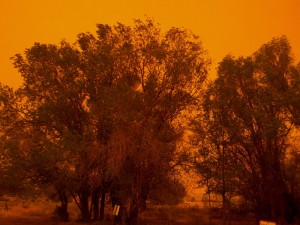 As you can see from this next picture, it looks like the apocalypse. These are the trees next to the post office. It was hard to breathe, my eyes were burning, everyone was driving with headlights on, and it was as dark as night at 3:00 PM.

I started to feel sick to my stomach — not because of the ash or the heat, but because of the thought of losing all of those beautiful trees and the unspoiled forests. Heaven knows how many animals have been displaced, horribly burned, or killed. It makes my soul hurt.

The upshot of all of this is the fires are now in New Mexico and headed this way. There have been no evacuations ordered yet, and there are still many miles between the ranch and the fire, but everyone around here is getting nervous.

There are a lot of animals that would need to be moved, and a notable shortage of horse-trailers in the area. And with the drought, there’s little water around for fire-fighting purposes. We all rely on ground water here — no city water or hydrants.

Most of the day today was miserable — the air was thick and heavy with ash. The sky was dark. The solar panels put out very little power to charge the batteries. However, as I’m typing this the sky is clearing a bit — perhaps the winds have shifted. The air is a bit more breathable — thank goodness.

As circumstances permit, I’ll keep you all posted.

This entry was posted in Life in New Mexico. Bookmark the permalink.