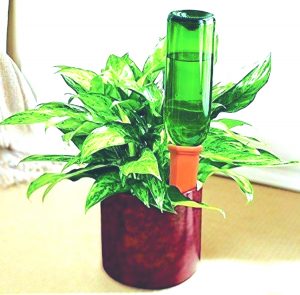 Ollas (pronounced “oy-yahs”) are an ancient, highly efficient watering system in use for over 4,000 years. They are unglazed terracotta pots that are buried in the ground with the neck exposed above the soil surface and filled with water for sub-surface irrigation of plants.

The way it works is that the microporous (unglazed) walls that do not allow water to flow freely from the pot, but the water seeps down near the roots only as the plant needs it, never wasting a single drop. Ollas nearly eliminate the runoff and evaporation common in modern irrigation systems, allowing the plant to absorb nearly 100 percent of water.

To use ollas in a garden or farm, burry ollas in the soil leaving the top slightly protruding from the soil The olla is filled with water and the opening is then capped with a lid – such as rock, clay plate or other available material to prevent mosquito breeding, soil intrusion and evaporation. Depending on the size of the ollas, watering could be done weekly, or twice a month instead of daily. 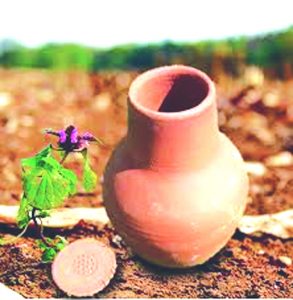 A modern take on ollas are Terracotta Plant Watering Stakes. They are inserted into the ground near the plants, and then a bottle is filled with water and inserted upside-down into the hollow terracotta stake.

The advantages stakes have over ollas are numerous: they can be added to existing plants indoors and out, you can easily adjust the bottle size to accommodate how thirsty your plants are, they don’t need a lid as the bottle provides a good seal, and it’s much convenient to remove the empty bottle, fill it elsewhere, then put the now full bottle into to stake.

Also, if you’re planning to be away for a long time you can replace the normal wine bottle with a magnum to achieve a longer unattended watering cycle.

Ollas cost between $20 and $50 each depending on the size, whereas Watering Stakes cost as little as $3 each and do the same job (wine bottle not included).

Plants benefit tremendously from the use of this ancient technology. Plants do much better when they are watered deep near the roots, and when their water supply is regular rather than sporadic. So expect not only to use a fraction of the water you do now, expect your plants to grow bigger, healthier and to produce more flowers and better fruits and vegetables.

This entry was posted in Growing Food and tagged irrigation, ollas, water stakes. Bookmark the permalink.