From Donkeys to Goldfish

The truth is that I actually like coyotes – I have a fondness for canids of all stripes – especially dogs, but coyotes are stars in terms of their ability to adapt and survive utilizing claw, tooth, and intellect. There are many stories of urban coyotes learning to ride subways late at night, travelling across cities through flood control channels, and other remarkable adaptations. How can you not admire an intelligent creature like that co-existing with us on this fragile planet?

The problem is that coyotes are opportunistic hunters, eating anything they can catch and kill. And they’re smart about it, using various techniques that give them the edge. A coyote can kill and eat a dog, for example, that’s bigger and stronger than them by simply outsmarting them. They can wear a dog out, or ambush them. This is a problem for me, because I have a dog who’s my canine companion, and I care about her as much (if not more) than most people. As much as I admire coyotes, I’m not willing to feed them my precious dog.

Most land-owners that surround Cielito Lindo Ranch would have no problem shooting, poisoning, or trapping a coyote. That’s not how we roll at CLR — so what’s the answer? Donkeys of course!

Besides being adorably cute, donkeys are fierce coyote fighters. They don’t fear coyotes at all, and they use their own equine kung-fu fighting style to battle them and keep them far away. Their attack involves chasing the coyotes with their head down in a “charging bull” style, as well as stomping them with their front hooves, and also kicking them with rear legs, which is topped off by biting them with very strong teeth and jaws. All the while braying at the top of their lungs to alert the entire county to what’s going on – and I’m also convinced that the bray is some kind of sonic attack – but I can’t be sure.

And donkeys even deploy a deeper strategy. The jenny (the female) stays with the herd (which includes all family members, including chicken, horses, family dogs, etc.)  and is ready to implement donkey-style kung-fu, while the jack (the male) goes in hot pursuit of the offending coyotes. This way the coyotes can’t effectively use their technique of luring the donkey away from the herd while their coyote cohorts attack the undefended herd. Smart donkeys!

So, I added donkeys to the shopping list! (Did I mention they’re cute too?)

Not too far from CLR is a wonderful place called Kiva RV Resort and Horse Hotel (a mouthful). If you go to the site right away  you’ll see that they haven’t removed Flax and Pumpkin from their website yet – and they should because those two “donks” now live at CLR! They are the new official CLR Coyote Patrol. I’ve already got their uniforms on order. 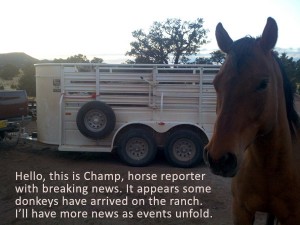 So, the donks ended up being much more than coyote protection – they’ve started to earn their way into the family of residents and staff here at CLR.

So, what could go wrong with this idyllic picture? Friendly donkeys – no more coyotes… perfect, right? Well… a simple act of non-lethal coyote control is indeed an act of tampering with the “circle of life” and there are always consequences!

Here is the chain of events in our case of tampering with nature:

1.       We had coyotes. We wanted to protect our four legged friends from them non-lethally – so we got two donkeys.

3.       After a few days, we noticed that large herds of wild antelope started showing up on the ranch. Yes, this is the home where the buffalo roam, and the deer and the antelope play.

4.       The antelope discovered the “drinker” – this is the water supply we provide for the horses and donkeys.

5.       The drinker has a mini eco-system in it to control potential mosquito infestation. It has gold-fish, mare’s tail, snails, and lily pads in it. The gold-fish eat the mosquito larva, the mare’s tail and the snails keep the water clear and the lily pads provide the gold-fish a place to hide from predators.

6.       The antelope discovered that lily pads are delicious, and they ate them all.

9.       One hundred and twenty dollars will need to spend to buy new lilly pads. Ouch. 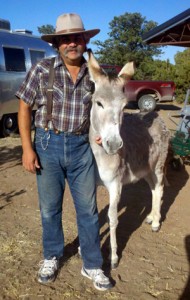 What a pain! How do you solve this predicament? Can’t get rid of the donkeys – need them. Can’t shoot the antelope – we’d ever do that. What to do?!

Well, the good news is that the problem solved itself. The horses, it turns out, didn’t exactly like the antelope elbowing in on their territory, so they’ve been chasing the antelope away. Also in the good-news category, amazingly the lily pads sprouted new leaves and saved themselves. And thankfully some of the fish survived.

So the imbalance in the circle of life was only temporary. The system self-repaired despite our efforts.

My effort to save a dog killed a gold-fish or two. A fair trade I suppose. I will say this, however – every time I tamper with nature’s way, I’ll think deep next time, and we’ll see how good I am at anticipating the results of my actions.

This entry was posted in Life in New Mexico. Bookmark the permalink.