With the walls up and the roof on the main lodge, we’re getting down to details and prep for plastering. Part of it is the use of cob in certain corners and small spaces, where a bale won’t reasonably fit and it’s too tight for adobe, too.

Cob is wonderful stuff. Our recipe is almost one part clay to one part sand (a little more sand than clay), and then four large handfuls of straw. It makes a nice mess that sticks, and mounds up nicely. 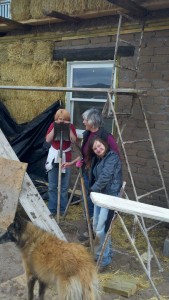 We had helpers over to visit and make cob–who doesn’t love to play in the mud.You can see the cob at the top. We’ll be doing more cob on some other tight spots. (The dogs didn’t help too much with the cob, but they liked the digging up dirt part of the day.)

To keep the bond beam protected, we’re using a wheat paste. We’re still trying various recipes, but so far it’s about 2 cups water to 1 cup four. Mix the four into a little cold water, add that to boiling water. Keep on the flame until it starts to turn translucent. This is then painted onto the wood to form an adhesion coat that clay will stick to, and the wood stays protected from absorbing too much water.

For the framed bathroom, we’re going to use light clay. This is where you take straw, dip it into a clay slip and stuff it into a form between the wood. This forms up into a wall, and we’ll be able to plaster over that. 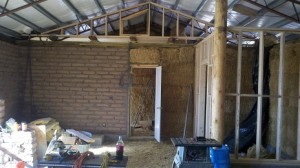 We also found insulation at a good price that is fiberglass without the formaldehyde. It’s from Johns Manville, and comes with a ton of improvements (besides not out-gassing formaldehyde), such as better moisture control and better sound insulation (and heat/cold) insulation. We bought this at Raks in Socorro, an awesome store, and they were actually able to help us pick out the product (thank you , Keith).

One Response to Cob Corners