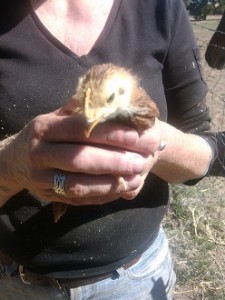 With the price of eggs going up–and the fact that we plan to give away eggs locally–it was time to ge the chickens. The coop is over half done and we had a friend give us a smaller coop, which spurred the arrival of the chickens.

They’re five week old right now, so we have some time yet before the eggs start coming. We’re starting off with three Rhode Island Reds–they seem the braver hens, too–and four Leghorns. They’re still on starter and still getting used to being outside and not in a brooder, so they’ve some adjustments to make. So far, the dogs are very curious, but the chicks are settling nicely. 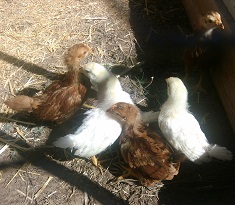 We’ll post more on the coop–we’re doing a combination of a large run area, a smaller run, and then a small coop that opens into a bigger one that will be insulated with straw. Our goal is to keep the hens cool in the summer with good ventilation (and light) and warm in the winter with good insulation and keep the light coming in with windows. If all goes well, the hens will be more than happy–and we’ll see about adding to the flock with some guinea foul and possibly a turkey or two.

The nice thing is the chicks are already interested in scraps–bits of lettuce and strawberry tops. And we’re getting them onto organic feed. So organic eggs are on the way. And when they’re a little bigger we’ll see if they want to help out this summer with controlling garden pests.

We’re also going to be using some scrap pallets to build the coop–and also some scrap PVC pipes to build chicken feeders. So more to come on the chicken project.