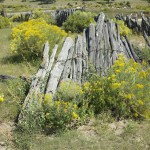 So far, it’s been as if New Mexico is testing us. We’ve had frosts in April, smoke from the Arizona fires in June, and a very windy May. All of this has put us behind schedule in building because we’ve been having to deal with the other stuff—it’s a balance between what do we need right away to be comfortable and what do we want to get done long-term.

The steel buidling we’ve been using for storage is great, but it needs insulation (really needs it now the summer sun is beating down). The sunshine that kept it warm in the winter is now keeping it too hot. We also have a deck to put on the structure so we have some outdoor space where we can sit and relax (something you have to keep in the schedule to stay sane). And we have fencing to put up to keep the donkeys in their own pasture—they tend to get too curious about new things.

We also have an outdoor shower we’re adding, and a new composting privy. Both will allow us to better have folks over as well as give us a little more space. (The shower in the Airstream is best suited to small children and pets.) Oh, and we’ve yet to get the first wind turbine installed (all that wind in May meant putting the turbine on hold until we got a few days without a breeze, which is something we’re still waiting on).

And we have the old corral (which we figure is at least 100-years old, since a neighbor who is 76 remembers it being here, and old, when he was a kid) to fix up so we can keep using it.

With all this, we still have building plans to finish and permit. So July, August, and September are going to be busy months—very busy.  The good news in all this is that the plans are coming along very well. The main building is going to have spectacular views (the great thing aboug passive solar is that you end up with windows—lots of them). It’ll also have adobe for thermal mass and straw bale for insulation. And solar and wind power installed. We’re also going for a cistern at the house (and rain water collection). We discussed piping water from the well, but for now we’d rather avoid the issus of pipes freezing in the winter. And we like the idea that we actually get to monitor our water usage—even when you have a lot of something, conservation is never a bad idea.

We also found the new recycling barrels at Pie Town’s community center—that’s terrific to have locally, but we still save all our cardboard, cans, glass, and recyclable plastics up in a large barrel here so we only have to make that trip about once a month.

And we still need rain—we also have the rainy season coming up. Which means we’ve yet to deal with mud. That’ll be one more test to pass, one more new adventure to get through. But as they say, so far so good.

This entry was posted in building phase. Bookmark the permalink.

3 Responses to A Passing Grade